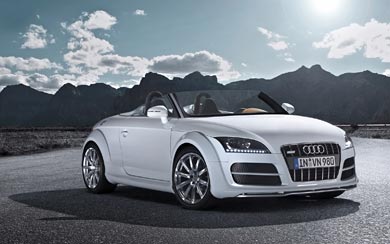 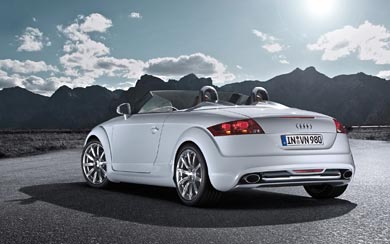 An open cockpit, an engine producing more than 220 kW / 300 hp) and a host of technologies borrowed from the world of motorsports – the Audi TT clubsport quattro is an uncompromising driving machine. Audi is presenting an updated version of the spectacular showcar and sensation of 2007 at the Wörthersee Tour, the big meet for Audi and VW enthusiasts in Reifnitz (Kärnten), Austria, from May 21 to 25.

Purism at a premium level – this was the goal that the designers and engineers set themselves for the Audi TT clubsport quattro. The low windshield is extremely flat. The A-pillars are nearly invisible, making the continuous window strip appear to be a single casting. Instead of the compartment for the soft top there are two humps behind the passenger compartment – the lines of the showcar painted in Suzuka Gray, pearl effect are intensely evocative of a speedster. Mounted in front of the humps are two massive rollover bars, which together with the strong A-pillars protect the driver and passenger if the car should roll over.

The front end is dominated by the powerful single-frame grill painted in high-gloss black. Beneath the headlamps, which feature a strip of LED daytime running lights, are large air inlets covered by horizontally split black grills.