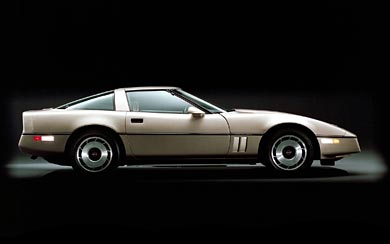 The Chevrolet Corvette C4 is a sports car introduced at the close of 1982 production as a 1984 model and ended in 1996, meaning that there’s no such thing as a “1983 Corvette”. It is the fourth generation of Chevrolet Corvettes built and marketed by Chevrolet.

The C4 Corvette is known for its sleek look. Instead of fiberglass, it was made from reaction injected molding plastics, a sheet molding compound. The C4 coupe also is the first Corvette to have a glass hatchback (except for the 1982 Collector’s Edition) for better storage access. It also had all new brakes with aluminum calipers. The Corvette C4 came standard with an electronic dashboard with digital liquid crystal displays for speed and RPM.

The C4 was a complete redesign of the previous generation, and the emphasis was on handling. The C4 Corvette was proclaimed the best handling car ever when it was released. This handling came with the benefit of a solid, uncompromising ride. The unit-body frame used in the C4 was prone to rattles and squeaks due to minimal sound deadening. Also due to the external unit-body frame, the door sills were quite deep and entry and exit have been likened to a “fall in and climb out” experience. The emergency brake was relocated in 1988 for easier entry and exit.