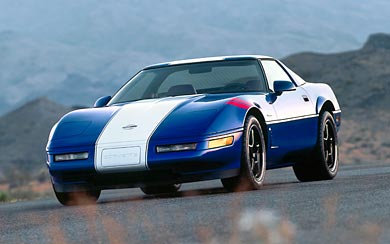 The Chevrolet Corvette (C4) was a sports car produced by the Chevrolet division of General Motors for the 1984 through 1996 model years. The fourth generation Corvette won its own loyal following as one of the world’s most desirable sports cars, with the last C4 produced on June 20, 1996.

Chevrolet released the Grand Sport (GS) version in 1996 to mark the end of production of the C4 Corvette. The Grand Sport moniker is a nod to the original Grand Sport model produced in 1963. A total of 1,000 GS Corvettes were produced, 810 as coupes and 190 as convertibles. The 1996 GS came with the high-performance LT4 V8 engine, producing 330 hp (246 kW) and 340 lb-ft (461 Nm) of torque. The Grand Sport came only in Admiral Blue with a white stripe down the middle, and black wheels and two red stripes on the front driver’s side wheel arch added to its distinctive look.