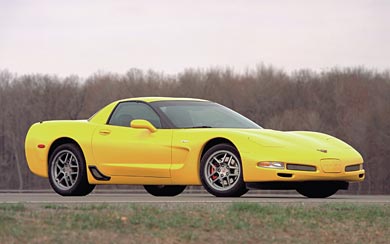 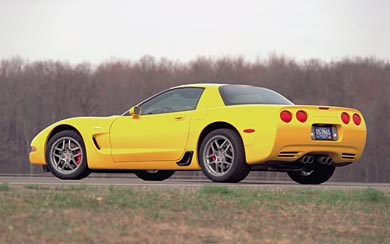 The C5 was a radical change from the previous generation. The car now had a hydroformed box frame, the transmission was moved to the rear of the car to form an integrated rear-mounted transaxle assembly and is connected to the engine via a torque tube. The 4L60E automatic transmission carried on, but the manual was replaced by the Borg-Warner T-56. Gone were the squeaks and rattles of the C4, and in replacement was an incredibly strong frame that would last for at least two more generations. The new C5 was better in every aspect than the C4 it replaced.

A successor to the ZR-1 made its debut in 2001 as the Z06, a nod to the high performance Z06 version of the C2 Corvette of the 1960s. Instead of a heavy double-overhead cam engine like the ZR-1, the Z06 used a high-output (LS6), a tuned version of the standard Corvette’s (LS1) producing 385 hp (287 kW). Although the Z06’s total output was less than that of the last ZR-1’s, the Z06 was much lighter and faster than the ZR-1 in every category except for top speed.

Like with the ZR-1, Chevrolet found that added power output did the C5 platform little good without platform modifications to bring the rest of the car up to par, and a stiffer body, uprated suspension, larger wheels and tires, a new six-speed manual transmission, and functional brake cooling ducts became part of the total package. The Z06 is 106 lb (48 kg) lighter than a standard C5 thanks to a titanium exhaust, thinner glass, lighter wheels, and a lighter battery.