Download Fiat Abarth 500 car wallpapers in HD for your desktop, phone or tablet. All images belong to their respective owners and are free for personal use only. 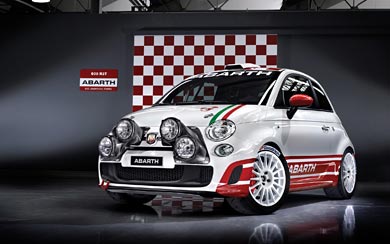 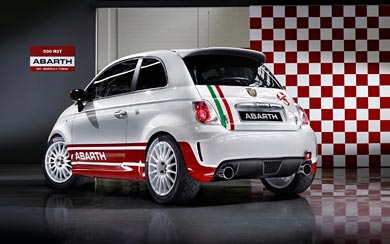 Abarth introduced its latest racing gem at the 51st Sanremo Rally. The new Abarth 500 R3T will lend its name to a promotional rally trophy in 2010, due to join the two track events (European and Italian) planned for the Abarth 500 Assetto Corse. For Abarth, this marks a return to promotional trophy events, a niche it has made its own for more than thirty years. Since 1977, to be precise, when the first ever Autobianchi A112 Abarth Championship was held, followed by trophies for the Fiat Uno, Uno Turbo, Cinquecento, Seicento, Punto Kit and Super 1600, Stilo, Panda Kit.

The Abarth 500 rally version will be type approved for Group R3T, the category for turbocharged cars up to 1600 cm3 in capacity. This class will be the future of the specialism because it represents a good compromise between car cost and performance. Ideal for private drivers and young people who want to show their worth in a true racing car, capable of outstanding performance by any standard.