Download Hyundai Veloster car wallpapers in HD for your desktop, phone or tablet. All images belong to their respective owners and are free for personal use only. 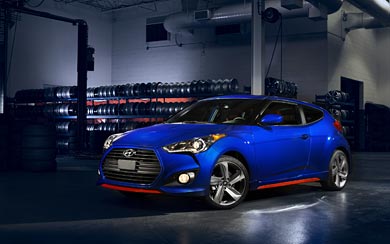 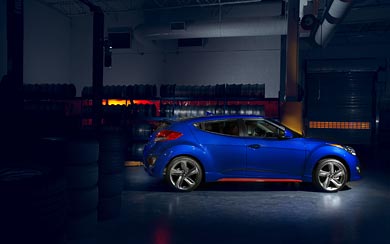 Hyundai announced the addition of the Veloster Turbo R-Spec to its line-up at the 2013 Los Angeles Auto Show. The heart of the R-Spec is the responsive, aftermarket-tunable 1.6-liter, direct-injected, turbocharged engine, along with unique design cues, enhanced chassis tuning, a B&M Racing Sport Shifter, and the lowest price point in the Veloster Turbo lineup. R-Spec production will begin in December 2013 with availability in early February 2014.

Hyundai Veloster Turbo R-Spec is the fourth R-Spec model in Hyundai's lineup, following in the footsteps of Genesis Coupe 2.0T R-Spec, Genesis Coupe 3.8 R-Spec and Genesis 5.0 R-Spec. R-Spec represents the ultimate performance version of each of these models. For Veloster Turbo R-Spec, sport suspension and steering settings have been retuned for optimum responsiveness, with higher spring rates and a more rigid transmission mount. On the powertrain side, R-Spec is available only with the 6-speed manual transmission, and a short-throw B&M Sport Shifter has been added for a tighter, more direct shift feel.