Download Maserati Khamsin car wallpapers in 4K for your desktop, phone or tablet. All images belong to their respective owners and are free for personal use only. 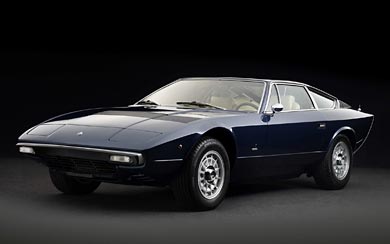 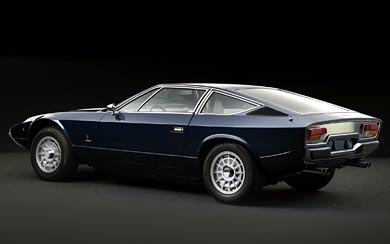 The Maserati Khamsin (Tipo 120) (named after the Khamsin, a hot, violent wind in the Egyptian desert) was a sports car introduced as a Bertone prototype in the autumn of 1972 at the Turin Auto Show. In 1973 it was put on display at the Paris Motor Show, where it was badged as a Maserati. Production of the vehicle started in 1974. The car had a front mounted 4.9 litre V-8 delivering 320 hp. The engine was pushed back as far as possible so it would be able to fit a spare tire for more room in the trunk. The Khamsin’s bodywork resembled a lower, flatter Ghibli, designed by Bertone. Production of the Khamsin ended in 1982, with only 430 vehicles produced. One of those was delivered to Luciano Benetton in 1981. 155 were brought to the United States.

The Khamsin had several unusual features, such as DIRAVI power steering, with higher than usual assistance for parking, decreasing with speed, and a glass rear panel (between the taillights) below the rear window, giving reverse visibility surpassing most cars, especially similar sports cars. Also, the Khamsin had features like hydraulic seats and an adjustable steering column, which were innovative features at the time. Air-conditioning was standard on the Khamsin.