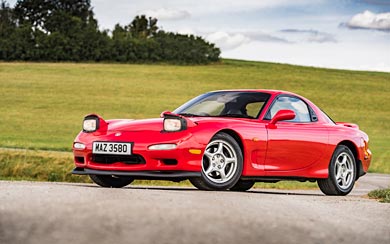 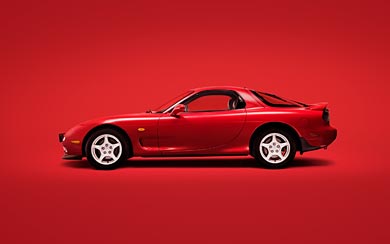 The FD RX-7 was Motor Trend’s Import Car of the Year. When Playboy magazine first reviewed the FD RX-7 in 1993, they tested it in the same issue as the then new Dodge Viper. In that issue, Playboy declared the RX-7 to be the better of the two cars. It went on to win Playboy’s Car of the Year for 1993. The FD RX-7 also made Car and Driver magazine’s Ten Best list for 1993 through 1995, for every year in which it was sold state-side. June, 2007 Road&Track magazine proclaimed “The ace in Mazda’s sleeve is the RX-7, a car once touted as the purest, most exhilarating sports car in the world.”

The sequential twin turbocharged system was a very complex piece of engineering, developed with the aid of Hitachi and previously used on the domestic Cosmo series. The system was composed of two small turbochargers, one to provide boost at low RPM. The 2nd unit was on standby until the upper half of the rpm range during full throttle acceleration. The first turbocharger provided 10 psi (0.7 bar) of boost from 1800 rpm, and the 2nd turbocharger was activated at 4000 rpm and also provided 10 psi (0.7 bar). The changeover process occurred at 4500 rpm, 8 psi (0.6 bar), was smooth, and provided linear acceleration and a wide torque curve throughout the entire rev range.