Download Mazda RX8 car wallpapers in HD for your desktop, phone or tablet. All images belong to their respective owners and are free for personal use only. 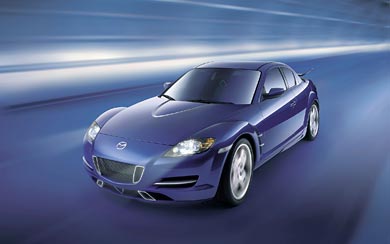 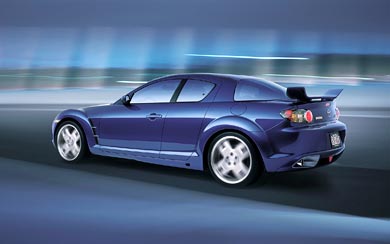 The RX-8 was designed as a front mid-mounted, rear-wheel drive 2+2 coupe. The car has a 50/50 weight distribution, achieved by mounting the engine behind the front axle. Weight is trimmed through the use of materials such as aluminium and plastic for the body panels and a carbon fiber composite driveshaft.

The car features a pair of rear-hinged “freestyle” doors (also known as suicide doors) in order to provide easier access to the rear seats. The RX-8 has no B-pillar between the front and rear doors, with the leading edge of the rear door acting as a ‘virtual pillar’ to maintain structural rigidity. Because of the overlapped design, the rear doors can only be opened when the front doors are open.

The RX-8 is powered by a 1.3 L naturally-aspirated RENESIS rotary engine, which features newly designed side intake and exhaust ports. The engine is smaller and lighter than previous rotaries, primarily due to the lack of a turbocharger and associated parts. The engine is designed in various configurations for different models, but in its most powerful setup develops 250 PS (246.58 hp, 184 kW) at 8,500 rpm with a redline at 9,000 rpm and fuel cut-off at 9,500 rpm. It won the International Engine of the Year and Best New Engine awards in 2003 and holds the “2.5 to 3 liter” size award for 2003 and 2004.

The power is delivered to the rear wheels via a 5- or 6-speed manual gearbox or a 4-speed automatic through a limited slip differential.