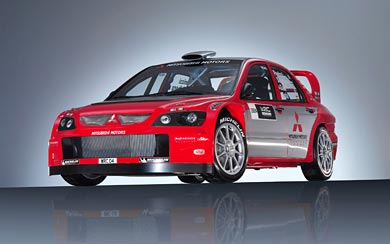 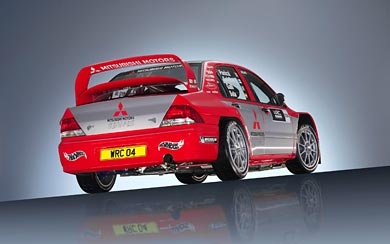 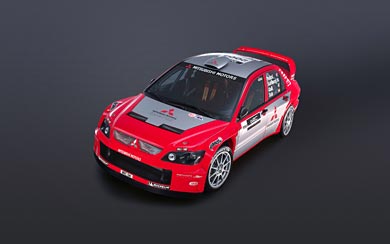 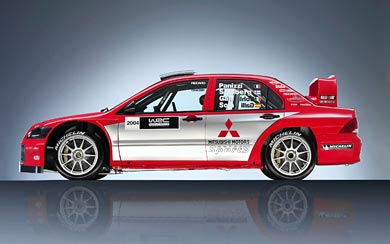 In the Lancer WRC04, around 6,000 changes were made compared to the Step2. The car continued with the 4G63 engine, mounted to a 5-speed semi-automatic transmission (interestingly, at the start of the season, Mitsubishi used a completely passive transmission, and later introduced active differentials) and a new all-wheel drive system co-developed by Ricardo Consulting Engineers and Mitsubishi Motors Motorsports (MMSP). The bodywork was subjected to extensive aerodynamic testing at the Lola Cars wind tunnel (this resulted in the completely new front airdam, the new wheel arches and the interesting, shopping trolley handle-like rear spoiler). The front brakes were upgraded to 8-piston calipers clamping 370 mm (15 in) discs. The car was suffering a lot from frustrating mechanical and electrical glitches (in New Zealand, both cars retired on the start line of the first stage after an electrical problem apperaed). Mitsubishi didn’t even complete a full season, since they continued to develop and test the car outside the WRC, but with little result in 2004; however, the car had some good moments and seemed to be promising after more development.

The lead Lancer WRC04 in the 2004 World Rally Championship was driven by ex-Peugeot driver Gilles Panizzi, with his brother Hervé as co-driver. The other pairings were Gianluigi Galli with Guido D’Amore, Daniel Solá with Xavier Amigo, and Kristian Sohlberg with Kaj Lindstrom.