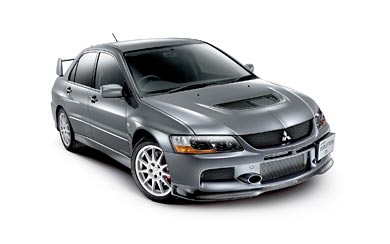 The Lancer Evolution FQ-360’s performance underlines its reputation as the most affordable supercar on the road. This is a practical, five-seater saloon car that can sprint from 0-60mph in just 3.9 seconds and on to an electronically limited top speed of 157mph.

The engine upgrades are accompanied by subtle but effective changes to the ‘Evo’s’ MacPherson strut front and multi-link rear suspension. Eibach springs have been introduced to complement the Bilstein shock absorbers. These new springs lower the ride height by 10mm at the front and 5mm at the rear, which enhances the car’s high speed stability and allows the Super Active Yaw Control (Super AYC) system to function more effectively. The latter has also been improved to provide a greater distribution of power between the rear wheels, increasing traction, especially on loose surfaces. Mitsubishi’s electronically-controlled four-wheel drive system (4WD) is carried over unchanged.

The aesthetic changes are modest and functional. A new carbon fibre front lip spoiler has been developed to provide additional downforce and improve high speed stability. A rear carbon fibre vortex generator comes fitted as standard. The 11-spoke Speedline Turini alloy wheels are also new and mimic those fitted to Mitsubishi’s tarmac spec rally car. The Yokohama ADVAN AO46 235/45 ZR17 tyres are carried over unchanged, while the Brembo braking system ensures that the Evolution IX MR has the stop to match its go.