Download Pagani Zonda760 RSJX car wallpapers in HD for your desktop, phone or tablet. All images belong to their respective owners and are free for personal use only. 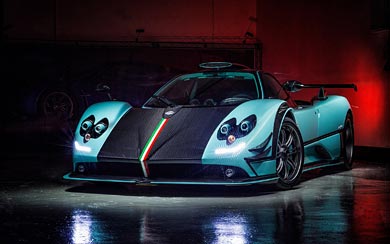 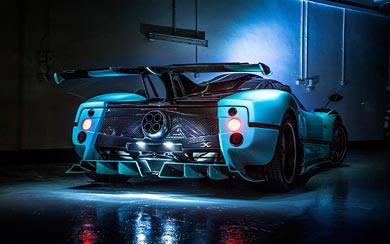 The Pagani Zonda enjoyed great success through many evolutionary models and special one-offs. When the Pagani Huayra was released in 2012, the Zonda was thought to have been pushed to the side to make way for the new supercar in the stable. However such was the popularity of the Zonda, that the orders kept coming for highly exclusive special editions costing millions of dollars.

In 2014 the Zonda 760 RSJX was revealed as a 760-series model Zonda that was destined for Hong Kong. The 760 RSJX is finished in a unique pastel green paint job with carbon fiber accents, and a stripe representing the Italian flag running down the length of the car from the rear wing to the front air dam.

Like other 760 series Zondas, the RSJX makes good use extra aero elements like canards on the front corners, an over the roof air duct with LMP1 style engine cover fin, altered rear diffuser and big rear wing to top it all off. The interior is covered with the usual plush assortments found in every Pagani, with the RSJX continuing the pastel green colour theme throughout the inside.