Download Peugeot 205 GTI car wallpapers in HD for your desktop, phone or tablet. All images belong to their respective owners and are free for personal use only. 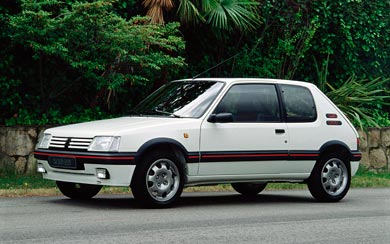 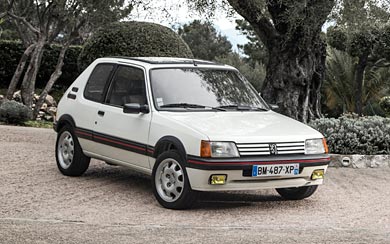 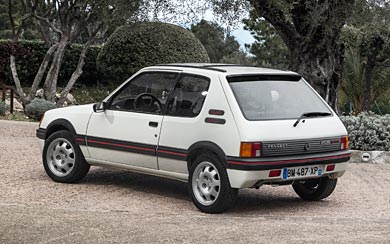 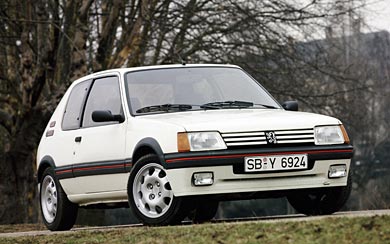 The 205 is still often treated as a benchmark in group car tests of the newest GTI models or equivalent. Peugeot itself has never truly recreated this success in future GTI models, although they came very close with the highly regarded GTI-6 variant of the Peugeot 306. A cabriolet version of the 205, known as the CJ (or CT in France), was designed and partially assembled by Pininfarina of Italy. A CTi version, with the same plastic arches and wheels as the 1.6 GTI was also available. Some later models incorporated the catalysed 1.9 engine.

With the early success of the 205 GTI in Europe, Motor Trend reported in 1984 that Peugeot was seriously considering adding it to its US lineup, even though Peugeot had a more upmarket image in the United States.[citation needed] Nothing ever came of such rumours, however, and any talk of Peugeot expanding its presence in US became moot when it was forced to pull out in 1991.

Sales of the GTI in the United Kingdom in the early 1990s were badly hit by soaring insurance premiums, brought about by high theft and ‘joyriding’ of cars of this sort. Increasingly stringent emissions regulations meant the 1.6 GTI went out of production in 1992, while the 1.9 was sold for a couple more years thanks to re-engineering of the engine to enable it to work properly with a catalytic converter, which dropped power to 122 bhp (91 kW; 124 PS).