Download Peugeot 405 Mi16 car wallpapers in HD for your desktop, phone or tablet. All images belong to their respective owners and are free for personal use only. 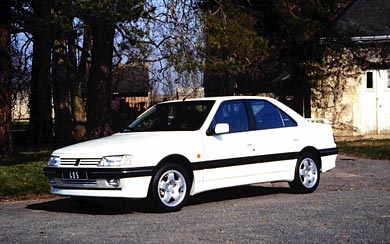 Considered one of the great hot cars of the 1980’s, the Peugeot 405 Mi16 also stands as one of the brands best cars in their long history. The Mi16 was positioned as the performance version of a rather ho hum four-door passenger car, so it had to give buyers a reason to take notice.

As was usual at the time, adding a sporty looking body kit to the exterior of the car was the way to let everyone know the car wasn’t just any ordinary 405. Five-spoke alloy wheels helped with this new look which was still on the conservative side, but hinted at something special. And special it was, independent suspension was used all round with MacPherson struts up front and trailing arms at the rear. Coupled with the stiff chassis, the Mi16 was a blast to drive.

The engine was first seen in the Citroen BX GTI 16V, but in the Mi16 it really came alive. Whilst not powerful to today’s standards, the power delivery was satisfying with the high revving nature eagerly begging to be pushed hard. 0-62 mph acceleration was quoted at 8.6 seconds, but Motor magazine was able to beat that time with a 0-60 mph time of 7.8 seconds and a top speed run of 134 mph, a few mph short of the official top speed.