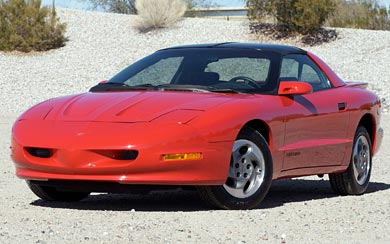 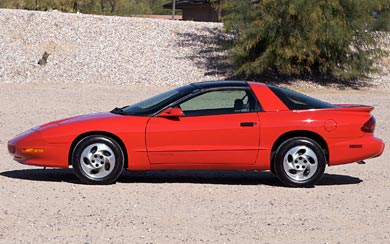 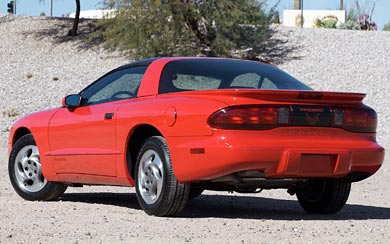 The fourth-generation Firebird amplified the aerodynamic styling initiated by the previous generation. While the live rear axle and floorpan aft of the front seats remained largely the same, ninety percent of the Firebird’s parts were all-new. Overall, the styling of the Firebird more strongly reflected the Banshee IV concept car than the 1991 “facelift” did. As with the Camaro, major improvements included standard dual airbags, four-wheel anti-lock brakes, 16-inch wheels, rack-and-pinion power steering, short/long-arm front suspension, and several non-rusting composite body panels. Throughout its fourth generation, trim levels included V6-powered Firebird, and V8-powered Formula and Trans Am. The T5 five-speed manual transmission was standard with the V6s, as was the Borg-Warner T56 six-speed manual for the V8s. A four-speed automatic was optional for both, featuring built-in electronic controls beginning in 1994.