Download TVR T350C car wallpapers in HD for your desktop, phone or tablet. All images belong to their respective owners and are free for personal use only. 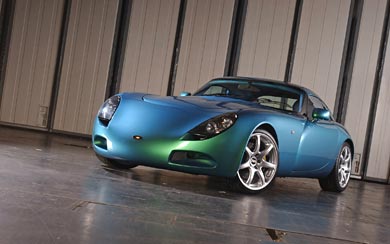 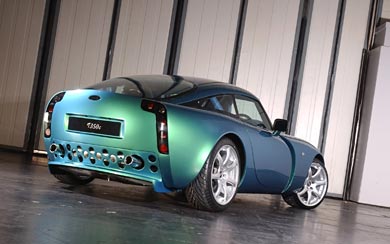 The T350C is a coupe based on the running gear of the universally acclaimed Tamora. The concept is to apply TVR’s expertise gained in Motorsport to a road car, and both shape and engineering owe much to TVR’s racing programme. It is intended to form the basis of a racing car for the new GT Cup class of the British GT Championship as well as for a number of overseas one-make race series.

This car is available in two forms – the T350C, where C stands for coupe, and the T350T, for targa, which is the version with two removable carbonfibre panels overhead. The T350 enjoys the performance its looks promise. It is propelled by the same 350 bhp version of TVR’s Speed Six engine that has helped the Tamora to such critical and sales success already. In the case of the T350, acceleration, top speed and handling have been helped by its aerodynamically superb shape as well as its lower weight and centre of gravity.