Download Vauxhall XVR Concept car wallpapers in HD for your desktop, phone or tablet. All images belong to their respective owners and are free for personal use only. 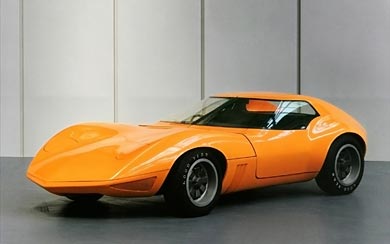 Sitting at only 40 inches in height, the Vauxhall XVR concept car was a sleek low slung prototype with gullwing doors and a wraparound front window that was integrated into the doors. This provided very generous side vision with the compromise of a blind spot directly in front of the driver due to the single central windscreen strut used to pivot the doors upward and outward.

The birth of this concept started when General Motors send Wayne Cherry to Vauxhall in 1965 to be the design director. His task with the help of his team was to design and create the XVR prototype, which had to be ready for the Geneva Motor Show in just 5 months time. Unfortunately only 1 of the cars made survived in the form of a fibreglass mock-up version, which was discovered in the roof of the Vauxhall styling studio. The working, driving metal version of the car is not with us today.

Cherry said “Thee cars were built, one in steel and two in glassfibre. The metal car was the one built for Geneva. Its bodywork was shaped by Motor Panels in Coventry, working from a solid glassfibre model that we painted a dark gloss. The show car was finished in a very dark green, like a British Racing Green.”