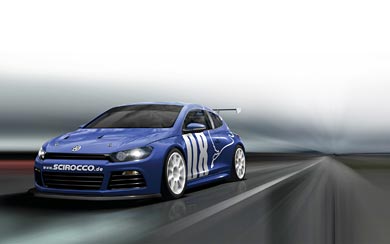 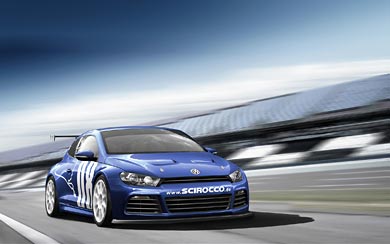 Volkswagen will present the world premiere of a 239 kW / 325 PS version of the new Scirocco today at the legendary GTI Meet at Wörther Lake. For two days later, a team of legendary drivers will start the 24-hour race at the Nürburgring in the sports version of the Scirocco. Thus, the new Scirocco will be in the spotlight at two cult events for car enthusiasts at the same time.

Volkswagen is presenting the racing version of the Scirocco GT24 at Wörther Lake in a world premiere. “This car doesn’t need to be driven to look fast. The Scirocco GT24 with the blue-white finish sits so low on its extended wheel wells that a hand will not fit between the wheel arch and the tyre. Yet the race car remains unmistakeably a Scirocco from every angle. Just even wider, even longer and even lower. The 325 PS Scirocco will also be driven during the race by legendary drivers like rally world champion Carlos Sainz and Hans-Joachim Stuck, three-time winner of the 24-hour Nürburgring race. Incidentally, “Striezel” Stuck won the very first 24-hour race at the Nürburgring in 1970. Now, thirty-eight years later, the Scirocco GT24 is competing. It draws its power from only two litres displacement: the 16-valve direct injection engine with a turbocharger and intercooler delivers its maximum torque of 340 Newton metres beginning from only 2,100 rpm. Gear changes are executed by a dual clutch gearbox (DSG), which is also available for the production model.