Download Volkswagen E Bugster Concept car wallpapers in HD for your desktop, phone or tablet. All images belong to their respective owners and are free for personal use only. 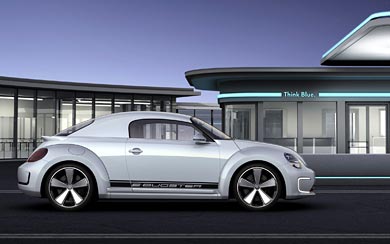 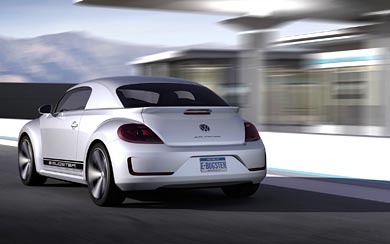 The latest Beetle might be ‘more power, less flower’, but that doesn’t mean that it’s anything other than environmentally conscientious, and that’s especially the case with the Volkswagen E-Bugster Concept, which is powered purely by electricity. The two-seat VW E-Bugster Concept continues the latest Beetle’s sporty theme. An electric motor provides 85 kWh of power, which can propel it from 0 to 60 mph in 10.9 seconds, and yet offer a range of at least 110 miles from the 28.3 kWh lithium-ion batteries. Even in a country as large as America, that’s sufficient for the majority of commuters’ needs, while if the E-Bugster needs a top-up, a fast-charging function allows complete recharging in just 35 minutes.

The quick charging is possible thanks to a new Combined Charging System that was developed in co-operation with Audi, BMW, Daimler, Porsche, Ford and General Motors/Opel. This allows charging via single-phase AC sources (for example a 120-Volt US or 230-Volt European domestic outlet) or via ultra-fast DC sources at specific charging stations. To succeed, this will require the development of a uniform industry standard for sockets and plugs and also for the charge controller, so that all charging types can be handled.