Download Volkswagen Passat car wallpapers in HD for your desktop, phone or tablet. All images belong to their respective owners and are free for personal use only. 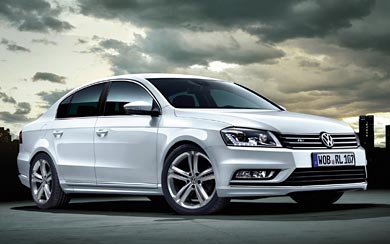 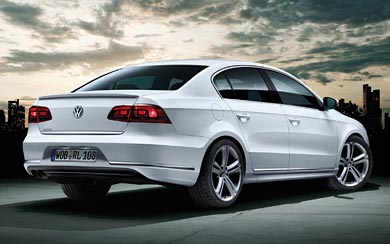 R-Line equipment is already offered on seven Volkswagen models. Now the Volkswagen Passat CC R-Line has got a sportier touch. Orders are now being taken for the four-door coupé with R-Line package. On its exterior, 17-inch (optional 18-inch) R-Line “Mallory” alloy wheels with 235/45 tyres lend a sporty touch to the Volkswagen Passat CC R-Line. The front spoiler and side skirts, each painted in body colour, were also re-styled. In addition, R-Line logos embellish the front side sections; the rear lights are smoked.

Inside the Volkswagen Passat CC R-Line, standard features include details like four customised tread plates in aluminium (with R-Line Logo in front) and a three-spoke leather-trimmed steering wheel with multifunction keys. The R-Line package has front fog lights and the Park Pilot system. The Passat R-Line leaves few wishes unfulfilled; even the base version of the Volkswagen Passat CC includes comfort and convenience features like sport seats and a climate control system.

The R-Line package is available with all Volkswagen Passat CC engines. Prices start at 2,200 Euros for the Passat CC 2.0 TDI (140 PS / 103 kW) with a 6-speed gearbox. Counting versions already introduced on the Golf, Scirocco, Touran, Tiguan, Passat, Passat Variant and Touareg, a total of eight models with R-Line equipment are now on the market.