Download Volkswagen Tiguan GTE Concept car wallpapers in HD for your desktop, phone or tablet. All images belong to their respective owners and are free for personal use only. 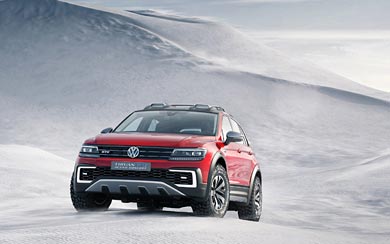 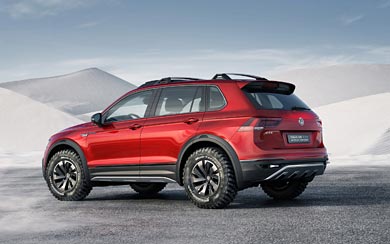 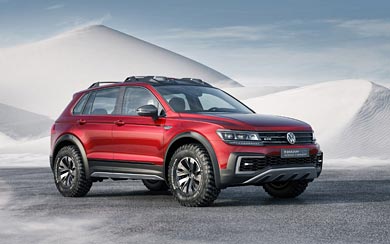 The Volkswagen Tiguan GTE Active Concept made its world debut at the 2016 North American International Auto Show (NAIAS), in the country that popularized the Sport Utility Vehicle (SUV). The vehicle’s most striking innovation is its efficient plug-in hybrid system that uses two electric motors and a gasoline engine, which can supply all four wheels with power, either automatically or at the push of a button. This concept proves how much potential plug-in hybrid systems have. The all-wheel-drive system’s technology ensures that this SUV can offer supreme off-road performance, even in all-electric mode.

The Tiguan GTE Active Concept is equipped with a turbocharged and direct-injection TSI gasoline engine that produces 148 horsepower and 184 pound-feet of torque, mated to two electric motors. These make 54 hp at the front wheels and 114 hp at the rear. The total system power of 221 hp can supply all four wheels with propulsive force under off-road conditions and the 4MOTION all-wheel-drive system also boosts traction and contributes to active safety on normal pavement.

The Tiguan GTE Active Concept uses a 6-speed dual-clutch (DSG) automatic transmission that was specially designed for hybrid use, with the front electric motor being housed inside the casing. Other plug-in hybrid components of the 4MOTION plug-in hybrid drive include: a 12.4 kWh lithium-ion high-voltage battery that can be charged either externally or via the gasoline engine; power electronics for the front motor; a second module at the rear that converts the battery’s DC current into AC for the electric motors; and an on-board charger.