Download Buick GSX car wallpapers in HD for your desktop, phone or tablet. All images belong to their respective owners and are free for personal use only. 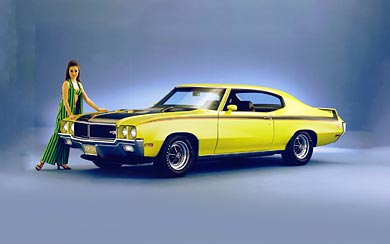 GSX / GSX Stage1 was Buick’s contribution to the Classic era American Muscle car list, based on the Skylark platform adding a high performance package available only on the GS 455 starting in 1970. The GSX Performance and Handling package was a $1,100 option on the GS455. The GSX was Buick’s very late entry into the Muscle Car market following less than spectacular sales late in the 1969 model year. The GSX was Buick’s answer to Pontiac’s GTO Judge, Oldsmobile’s 4-4-2 W-30, and Plymouth’s HemiCuda. Buick advertised it as “A Brand New Brand Of Buick” and “Another ‘Light Your Fire’ Car From Buick”. It came standard with a 455ci engine with or without the optional Stage 1 performance engine upgrades during the first year of release.

Only 678 GSXs were produced in the second half of the 1970 model year beginning in March 1970. Just 278 were equipped with the standard 455, a further 400 purchasers selected the optional Stage 1 performance package. The performance of a GSX (or GS) Stage-1 is comparable to and possibly surpasses that of the HemiCuda, but in a much more luxurious car. The impressive performance is partly due to the light weight of the 455 which is roughly 150 lb (68 kg) less than the 426 Hemi or Chevrolet 454. At 510 lb-ft the Buick 455 produced the highest torque output of any American production performance car, a record held for 33 years until finally surpassed by the Series 2 V10 Viper in 2003. The 1970 Buick GSX has arguably the most extensive list of standard high performance features of any classic era muscle car.