Download Ford RS200 car wallpapers in 4K for your desktop, phone or tablet. All images belong to their respective owners and are free for personal use only. 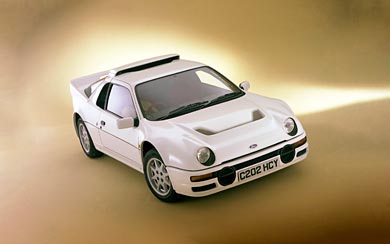 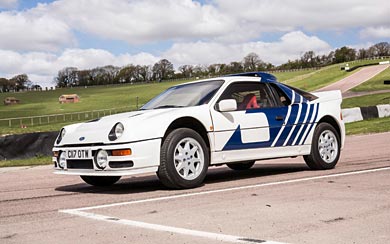 Following the introduction of the MKIII Escort in 1980, Ford Motorsport set about development of rear-wheel-drive, turbocharged variant of the vehicle that could be entered into competition in Group B rally racing, and dubbed the new vehicle the Escort RS 1700T. A problem-filled development led Ford to abandon the project in frustration in 1983, leaving them without a new vehicle to enter into Group B. Not wanting to abandon Group B or simply “write off” the cost of developing the failed 1700T, executives decided to make use of the lessons learned developing that vehicle in preparing a new, purpose-built rally car. In addition, Ford executives became adamant that the new vehicle feature four-wheel-drive, an addition they felt would be necessary to allow it the ability to compete properly with four-wheel-drive models from Peugeot and Audi.

The new vehicle was a unique design, featuring a plastic/fiberglass composite body designed by Ghia, a mid-mounted engine and four-wheel drive. The cars were built on behalf of Ford by another company well known for its expertise in producing fibreglass bodies – Reliant. To aid weight distribution, designers mounted the transmission at the front of the car, but this required that power from the mid mounted engine go first up to the front wheels and then be run back again to the rear, creating a complex drive train setup. The chassis was designed by former Formula One designer Tony Southgate, and Ford’s John Wheeler, a former F1 engineer, aided in early development. A double wishbone suspension setup with twin dampers on all four wheels aided handling and helped give the car what was often regarded as being the best balanced platform of any of the RS200’s contemporary competitors. Such was the rush to complete the RS200, the Ford parts bin was extensively raided – the front windscreen and rear lights were identical to those of the early Sierra, for example, while the side windows were cut-down Sierra items.