Download Maserati 300S car wallpapers in 4K for your desktop, phone or tablet. All images belong to their respective owners and are free for personal use only. 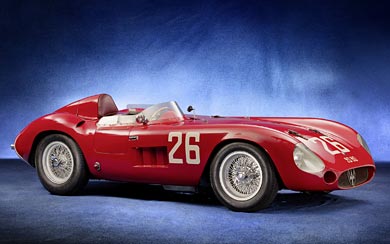 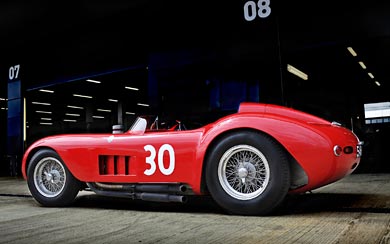 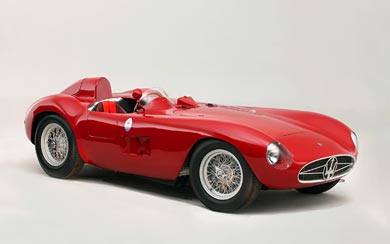 The Maserati 300S was a racing car produced by Maserati of Italy between 1955–58, which competed in the FIA’s World Sportscar Championship. Twenty eight examples were produced.

The 3.0-litre (approx 245 bhp (183 kW) at 6200 rpm) engine was based on the Straight-6 design of the Maserati 250F and incorporated a lengthened stroke developed by Vittorio Bellentani to increase the capacity from the original 2.5-litres. The compression ratio was reduced from 12:1 to 9.5:1, partly due to the FIA regulations requiring the engine to be run on road car fuel. It used three Weber carburettors, initially 42DCO3, later 45DCO3. A trellis structure was used instead of the tubular one of the 250F, and the aluminium body was by Medardo Fantuzzi. The brakes were the same as the 250F, beautifully machined alloy drums with extensive fining. The suspension was also of the same design as the 250F but with some strengthening to cope with the rougher tracks and road surfaces encountered in WSC racing. New features for the 300S included the incorporation of a DeDion type rear axle, a transverse four speed gearbox and two chain driven camshafts.

After a poor showing in the first season (1955) due mainly to mechanical malfunctions and development problems, it won at the Nurburgring in 1956 and finished second overall. It was second to the Maserati 450S, and was followed by the Maserati 350S. After the Guidizzolo accident (1957), the last few 300S were sold to customers in the USA. Giulio Alfieri gave up an attempt to fit it with fuel injection. One 300S was developed with the new V12 engine, becoming the Maserati 350S.