Download Mercedes SLR car wallpapers in 4K for your desktop, phone or tablet. All images belong to their respective owners and are free for personal use only. 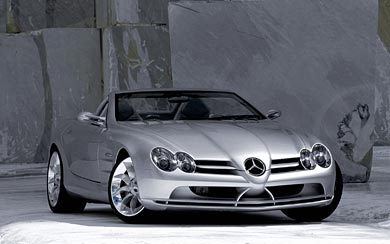 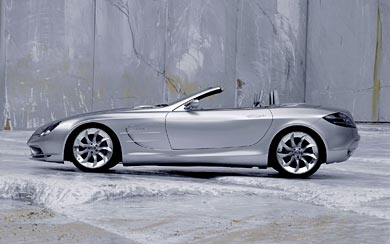 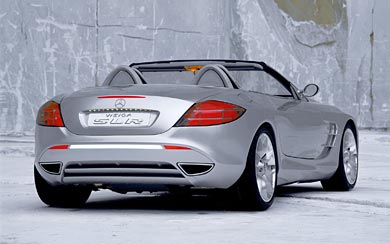 The Vision SLR Coupe was presented at the Detroit Auto Show in 1999 as ‘Tomorrow’s Silver Arrow’. This claim was reflected in every aspect of the concept vehicle. Designed as a Gran Turismo for the 21st century, it incorporated styling themes from the current Silver Arrow Formula One race-cars and from the SLR sports cars of the 1950s, weaving them together into a new and fascinating design. Later in 1999, at the Frankfurt Motor Show (IAA), Mercedes-Benz presented the roadster version of the Vision SLR. In terms of styling and engineering it closely resembled the all-enclosed version, although some new themes were also aired, such as a soft top made of an innovative translucent material.

The body of the Vision SLR expressed dynamism and power. The striking front section with the V-shaped nose and the distinctive twin-airfoil design – a motif which was repeated at various points around the body and in the interior and was inspired by the Formula One race-cars – harmonised with the four-headlamp design familiar from other models. The long and extended bonnet, the powerfully sculpted fenders and the gullwing doors of the Vision SLR were based on styling ideas first seen in the legendary SL models of the fifties and their SLR racing versions, in which Juan Manuel Fangio, Karl Kling and Stirling Moss achieved many victories. Expressive but by no means aggressive, the Vision SLR displayed a muscular body whose every fibre was taut and honed, poised to go into action at a moment’s notice.