Download Chrysler ME Four Twelve Concept car wallpapers in HD for your desktop, phone or tablet. All images belong to their respective owners and are free for personal use only. 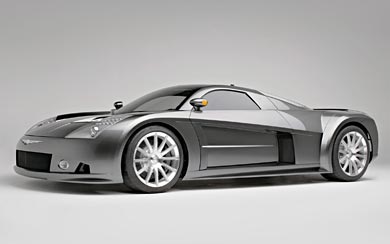 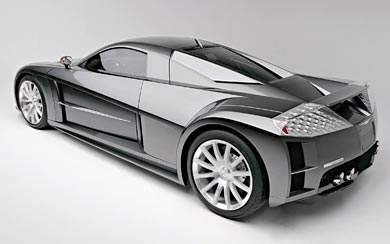 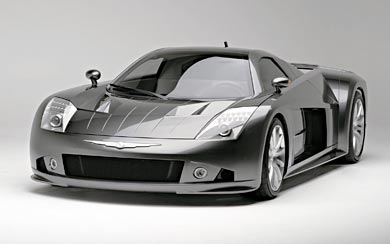 There were two ME Four-Twelve vehicles produced. The first was an auto show version using performance expertise from Daimler, but with limited operational capabilities. It was designed behind-the-scenes during 2003 by a small team. The auto show vehicle, unveiled at the 2004 North American International Auto Show (NAIAS) in Detroit, took less than one year for design and development. The exterior design was done by American Brian Nielander.

The chassis tub of the ME 412 is carbon-fiber and aluminum honeycomb. It uses a 4130 steel rear subframe and aluminum castings. The body is lightweight carbon fiber. The low profile of the vehicle contributes to its aerodynamics, while multiple air-intakes enhance cooling. The car rides on 265/35ZR19 tires in the front and 335/30ZR20 tires in the rear (on 19- and 20-inch cast aluminum wheels respectively). The brakes are six-piston-calipers with 16-inch discs.

The modified 6.0 L aluminum v-12 engine features a newly developed cylinder head, special intake and exhaust manifolds as well as forged internals such as pistons and crankshaft to accommodate the forced induction system, i.e. four turbochargers, which brought the output of the engine to an astounding 850 hp (634 kW; 862 PS), this would have made it the most powerful as well as the fastest road-going production vehicle at the time. The seven-speed transmission is a sequential dual-clutch semi-automatic with the capability of shifting gears in 200 milliseconds. Claimed acceleration from 0-60 mph is 2.9 seconds, and 0-100 mph in 6.2 seconds. It can cover a quarter mile in 10.6 seconds, with a trap speed of 136 mph (219 km/h). Estimated top speed was claimed to be 248 mph (399 km/h).