Download Ferrari SP3JC car wallpapers in HD for your desktop, phone or tablet. All images belong to their respective owners and are free for personal use only. 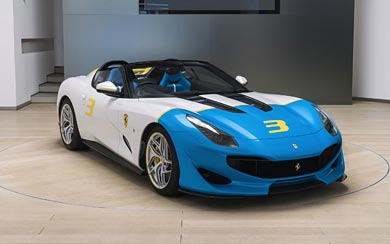 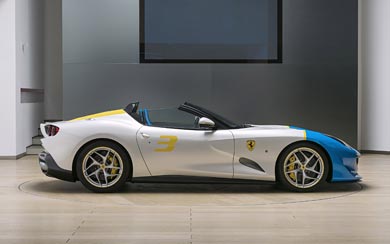 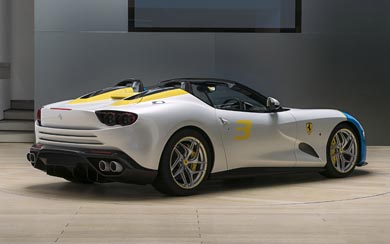 With a brief to create a pure, uncompromising roadster, the latest one-off creation from Ferrari’s Special Projects is the SP3JC. The open top two-seat supercar based off the Ferrari F12tdf, has been built for John Collins, one of the most successful Ferrari specialists in the world.

The design and development process took over two years to complete, with the owner giving input along the way. This can seen in the colour scheme of the SP3JC, with a pop art style livery composed of a Azzurro Met and Giallo Modena livery on top of the Bianco Italia base colour.

Ferrari says the design harks back to the V12-engined spiders of the 1950s and ‘60s, a design that features a muscular front end that emphasises the front engined layout of the car. The removal of the roof has meant a new rear deck design with a flying deck element placed between the two roll hoops. The hood makes use of two glass panels positioned to show off the V12 sitting underneath, a V12 that produces 780 PS (574 kW).