Download Mitsubishi Eclipse car wallpapers in HD for your desktop, phone or tablet. All images belong to their respective owners and are free for personal use only. 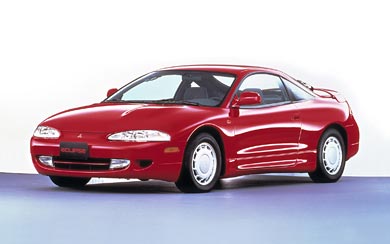 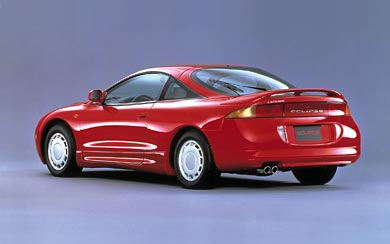 The second generation car maintained the market focus of the 1G car, but had a major update in styling and had different engines between trim levels. New to the line was a convertible model, the Spyder, introduced in 1996. The convertible was available in two trims: the GS and the GS-T. The former was powered by the non-turbo 4G64 engine, and the latter by the turbo 4G63. The GSX (all-wheel-drive) hardtop model was also powered by this engine. There was no convertible model powered by the Chrysler 420a.

The turbocharged engine option continued as the 4G63, but was modified for more power as compared to the previous generation (210 hp vs 195 hp). The non-turbo equipped car had two different engines depending on the market they were produced for. The US version engines were producing 140 hp, found only in the hardtop RS and GS trims, was a modified version of the Chrysler Neon engine, manufactured by Chrysler and delivered to and installed at the Diamond Star Motors facility. The Europe version engines were naturally aspirated 4G63 with 141 hp. From 96-99 the GS Spyders were mated with the 4g64 (2.4 L) naturally aspirated engine provided by Mitsubishi.