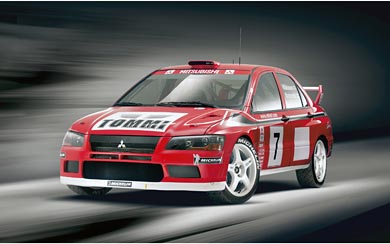 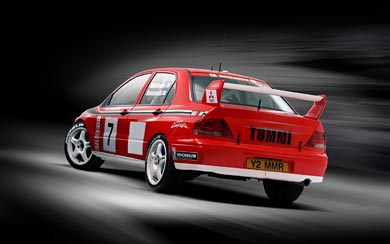 The Lancer Evolution is unique among its competitors in the World Rally Championship in that it was a homologated Group A car slightly modified to be able to race competitively against, from the 1997 season onwards until the San Remo Rally in 2001, World Rally Car class cars. They were successful in the WRC Rallies from 1996–1999,thanks to the Finn Tommi Mäkinen, for clinching the driver’s titles from 1996–1999, and the help of teammate Richard Burns for clinching the constructors’ championship for the first, and thus far only time in 1998.

The Evolution however was replaced in late 2001 by the firm’s first World Rally Car, named simply the Lancer Evolution WRC, which lasted in works hands, driven by Makinen, Freddy Loix, Alister McRae and Francois Delecour until Mitsubishi took a sabbatical from the championship at the end of 2002. It was succeeded for the 2004 Monte Carlo Rally by the Lancer WRC04. Mitsubishi pulled out of the World Rally Championship after the 2005 season with the Lancer WRC05 still being driven by privateers including Italian former works driver Gigi Galli and the Swede, Daniel Carlsson, in the years following. The Lancer Evolution however still competes in the Group N category.