Download Buick LeSabre Concept car wallpapers in HD for your desktop, phone or tablet. All images belong to their respective owners and are free for personal use only. 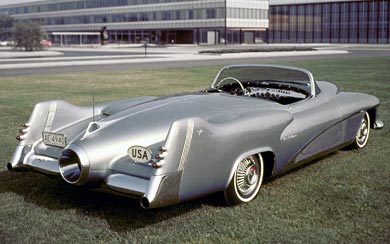 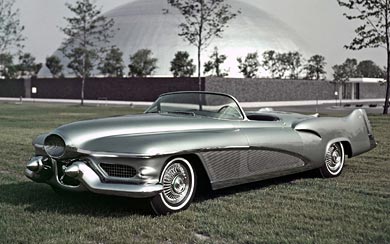 The Le Sabre was the brainchild of General Motors Art Department head Harley Earl. The design was Earl’s attempt to incorporate the look of modern jet fighter aircraft into automotive design. As jets replaced prop-driven aircraft in the late 1940s, they symbolized the very latest in design and engineering, and Earl had hoped to carry this concept into automobile design.

The project was a follow-up to Earl’s famous 1938 Y-job. Like all his projects, it was built to be roadworthy, and became Earl’s personal automobile for two years after finishing its tour of the auto show circuit. With a body made of aluminium, magnesium, and fiberglass, it was powered by a supercharged 215 cu in (3.5 L) V8 able to run on gasoline (petrol) or methanol (like Indy roadsters of the period did), and had an unusually-placed rear-mounted Buick Dynaflow automatic transmission. This was later changed to a GM Hydramatic. In addition to its jet inspired design, the 1951 Le Sabre also featured numerous advanced features, including a 12-volt electrical system (most cars of the period were 6-volt), heated seats, electric headlights concealed behind the center oval “jet intake”, front bumper dagmars (later made famous on 1957-9 Cadillacs), a water sensor to activate the power top, and electric lifting jacks integral to the chassis to aid tire changes.

The Le Sabre was GM’s first use of a rear-mounted transmission, which would reappear in the Pontiac Tempest. It was also the first use of the aluminum-block 215, which appeared in the Buick Special and Skylark, Oldsmobile Cutlass/F-85 and Jetfire, Pontiac Tempest and LeMans, and ultimately in numerous British marques, including Rover, Land Rover, Range Rover, Triumph, MG, and Morgan.