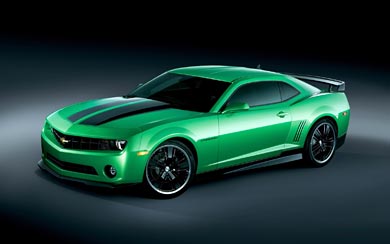 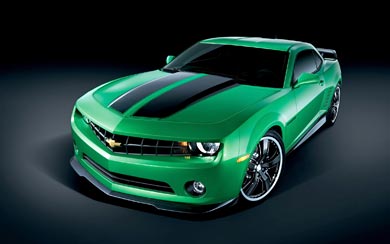 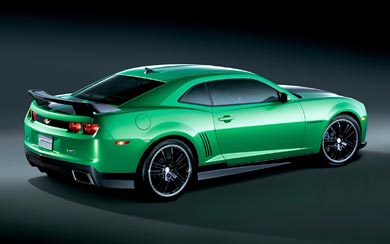 The Camaro Synergy concept previews a new Synergy Green production exterior color that will be offered on a special-edition Camaro in the first half of 2010. It also features a host of the latest Camaro accessories offered through Chevy dealers. They dramatically enhance the performance appearance of the car, demonstrating the personalization possibilities open to Camaro owners. Designers took liberties with the accessories, creating a totally unique package.

The ground effects include pronounced rocker moldings, a rear diffuser-type styling piece and a front spoiler. They, along with the rear wing spoiler and rally stripes, are finished in the production Cyber Grey color, although the ground effects and spoiler can be painted to match the exterior of the car. The Rally stripes are adhesive-backed and are offered in grey, black or white. They’re part of a broader range of heritage-inspired graphics that also include “hockey stick” stripes for the front fenders.

Chevy designers further enhanced the concept with a Pedders coil-over lowering kit and a set of large, Brembo brakes, as well as color-coordinating the Jet Black interior with Synergy Green accent stitching, piping and other accents. The lowering kit, brakes and interior accents are not among the accessories offered for the Camaro, but represent common and popular aftermarket upgrades.