Download Novitec Rosso Ferrari 458 Spider car wallpapers in HD for your desktop, phone or tablet. All images belong to their respective owners and are free for personal use only. 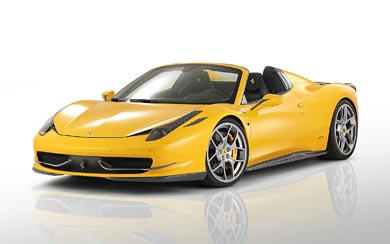 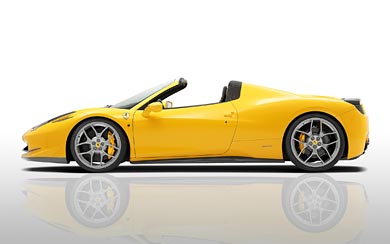 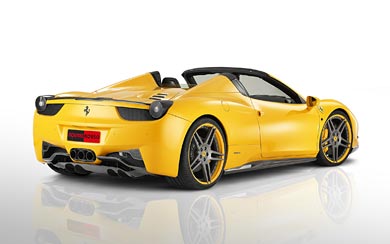 After releasing their package for the Ferrari 458 Italia, tuner Novitec Rosso have brought it to the 458 Spider. Power from the 4.5L V8 is now maxed out at 617 PS (454 kW) at 9,100 rpm, up from the standard 578 PS (425 kW) the SPider makes from the factory. Torque has also been increased, now up to 419 lb-ft (568 Nm). This is thanks to a new carbon-fiber air box with modified intake routing and a high performance exhaust.

The exterior appearance has been refreshed with a new two-piece front spoiler with side flaps, new side skirts, rear bumper and wing. The wheel consist of large 22-inch forged pieces which are very light weight. Finally the suspension has been equipped with a hydraulic system that allows the cars ride height either be raised by 40mm of lowered by 35mm.