Download Volkswagen Beetle GSR car wallpapers in HD for your desktop, phone or tablet. All images belong to their respective owners and are free for personal use only. 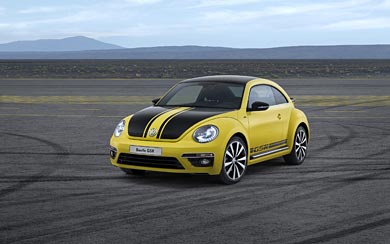 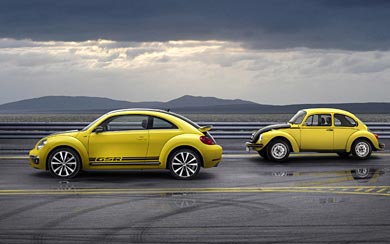 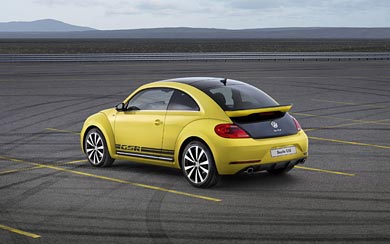 Volkswagen launches a Beetle designed solely with dynamics in mind: the new GSR. The exclusive, powerful 155 kW / 210 PS model will take centre stage at its world premiere at the 2013 Chicago Auto Show. Limited edition: 3,500 cars; worldwide. GSR – a quaint abbreviation with a legendary predecessor: the “Yellow/Black Racer” based on the Beetle 1303 S. And only 3,500 cars of the earlier model were produced as well. Exactly 40 years ago, the sportiest series production Beetle of all time made its debut.

With respect to the look of the Beetle GSR, Volkswagen has systematically re-interpreted the concept of the 1970s GSR for the modern era. Just like the GSR from days gone by, the body of the new version is yellow. The bonnet and the boot lid of the 1973 Beetle were painted in matt black, as were the bumpers. Black trim strips underneath the side windows and black/yellow side stripes above the doorsills rounded off the look. Now, yellow and black are the link between old and new – the bonnet and the boot lid of the new Volkswagen Beetle GSR are black once again, however the roof and the exterior mirror trims are also black on the new model. Black/yellow stripes with “GSR” lettering ensure a unique silhouette above the side sills. Yellow painted bumpers in new R-Line design and a yellow/black rear spoiler complete the GSR look. As opposed to the older Beetle, the Beetle GSR can also be ordered in “Platinum Grey / Black” as an alternative.