Download Volkswagen Beetle LSR car wallpapers in HD for your desktop, phone or tablet. All images belong to their respective owners and are free for personal use only. 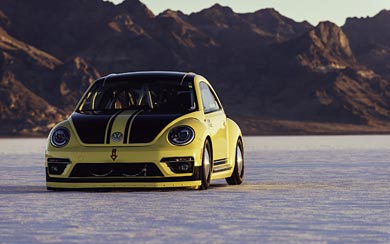 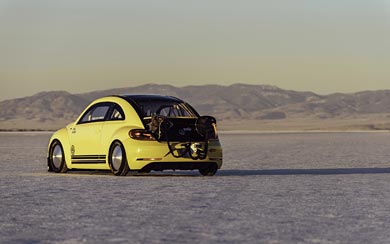 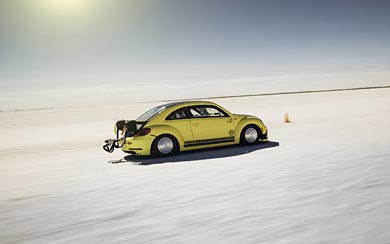 A specially-tuned Volkswagen Beetle has set a new speed record at the World of Speed event that has long been a tradition at Lake Bonneville in Utah (USA). The Beetle LSR (Land Speed Record) with a turbocharged 2.0-litre direct-injection engine (TSI) drove the fastest speed ever documented for a Beetle, reaching 328.195 km/h (205.122 mph) over a distance of one mile.

In order to reach top speeds well over 300 km/h, many aspects of the Beetle LSR were reworked, and the car was modified to conform to regulations for record drives on salt flats. The output of the 2.0-litre TSI was boosted to a peak power of 550 PS (by changes that included a new turbocharger, different pistons, camshafts, connecting rods and cylinder head modifications). The record-setting vehicle also stands out with an impressive torque of 571 Newton metres.

To perform well under extreme conditions, the Beetle was equipped with special wheels and tyres for driving on salt, and the body was lowered significantly. A limited-slip differential was also used to improve traction, while a safety package provided for the necessary protection; it consisted of a rollover protection cage, a race seat with five-point harness and a fire extinguishing system. In addition, the record-setting car had two brake parachutes that were also used to slow down the Beetle.