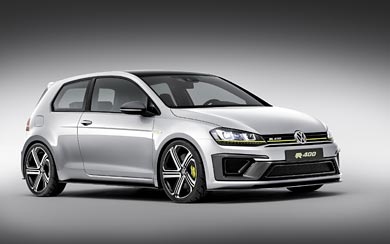 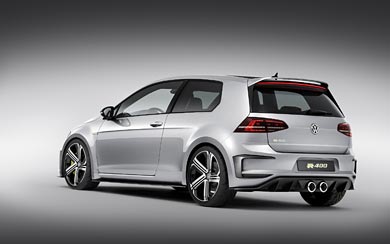 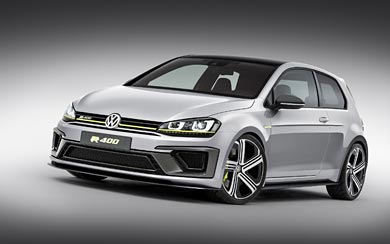 The Golf R 400, including its all-wheel drive system, weighs just 1,420 kg thanks to its compact high-performance engine (2.0 TSI), lightweight dual-clutch gearbox and low body weight. Its weight-to-power ratio is a dominant 3.55 kg per PS. The permanent all-wheel drive system by Volkswagen – 4MOTION – is also one of the most fuel-efficient systems of its kind. In addition, the Golf is also exceptionally aerodynamic, as the R 400 as well. Perfection in details runs through the entire concept of the Golf R 400 – from the engine to the largely new body design. This extreme Golf is painted in “Silver Flake”; creating a contrast to this light metallic colour are the car’s glossy “Black” roof and mirror caps in genuine carbon. Also designed in painted carbon effect are the splitters (wrap-around aerodynamic parts) adapted from motorsport and genuine carbon accents in the interior.

Typical of all Golf R cars, due to their exceptional power reserves, has always been their permanent 4MOTION all-wheel drive system. Of course, this also applies to the Golf R 400 being shown in Beijing. In this car, the all-wheel drive system is coupled with an automatic 6-speed dual-clutch gearbox (DSG), which can also be shifted manually as an alternative via the gear shift lever or steering wheel paddles.