Download Ferrari 250 GT Berlinetta car wallpapers in HD for your desktop, phone or tablet. All images belong to their respective owners and are free for personal use only. 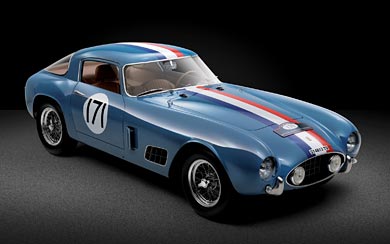 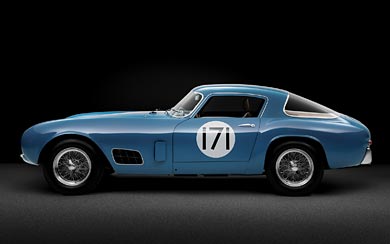 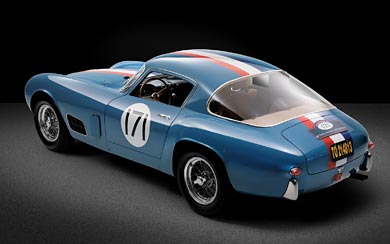 The 250 Granturismo Berlinetta, nicknamed the “Long Wheelbase Berlinetta”, was also called the “Tour de France” after successfully competing in the the 10-day Tour de France automobile race, not the famous bicycle race of the same name. There were 77 Tour de Frances built. A number of 250 GT “Tour de France” Berlinettas were sold for GT races from 1956 through 1959. Construction was handled by Carrozzeria Scaglietti based on a Pinin Farina design. The engine began at 240 PS (177 kW; 237 hp) but rose to 260 PS (191 kW; 256 hp) by the end.

Scaglietti appeared at the 1956 Geneva Motor Show with their own 250 GT prototype, which became known as the limited production, Series I, “14-louvre” 250 GT Berlinetta. The first production car was built in November 1956, and production was now the responsibility of Scaglietti in Modena.

There were five series of 250 GT Berlinettas in all. From mid-1957, the Series II cars were introduced, with three louvers and covered headlights. Just 15 were produced. Series III numbered 36 cars; these retained the covered headlights but had just a single vent louver. In 1959, eight single-louver cars were built with open headlights, a new Italian requirement. Zagato also made five superlight cars.