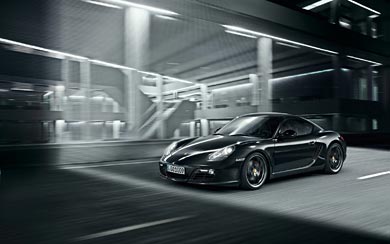 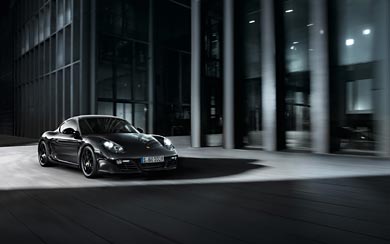 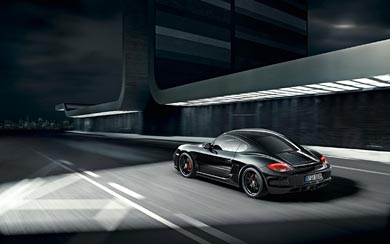 The next step up from the Cayman S is known as the Cayman S Black Edition: Porsche is bringing the mid-engine coupé to market in a special edition limited to 500 units boasting even better performance and especially lavish equipment specification. The Cayman S Black Edition is powered by a 3.4 litre six-cylinder boxer engine with power output increased by 10 hp (7 kW) to 330 hp (243 kW) at 7,400 rpm (an additional 200 rpm). The maximum torque remains unchanged at 370 Newton metres at 4,750 rpm.

The extra power feeds directly through into the performance of the all black two-seater. The acceleration times from nought to 100 km/h (62 mph) are improved by a tenth of a second to 5.1 seconds with the six-gear manual transmission and to 5.0 seconds with the optional Porsche Doppelkupplungsgetriebe (PDK) respectively. A mere 4.8 seconds are required if the Launch Control is activated on the Sport Chrono package, available as an option. The Cayman S Black Edition’s top speed is two kilometres per hour (1.24 mph) faster than that of the Cayman S – 279 km/h (173 mph) with the manual transmission and 277 km/h (172 mph) with the PDK respectively.

The Cayman S Black Edition is not just more sportily agile in terms of its longitudinal dynamics but laterally as well. Among other factors, this is attributable to the Boxster Spyder wheels in black, which with a diameter of 19 inches are not just one inch bigger than the standard Cayman S wheels but are also half an inch wider than the optional 19 inch wheels on the Cayman S. The tyre sizes fitted are 235/35 ZR 19s on the front axle and 265/35 ZR 19s on the rear axle.