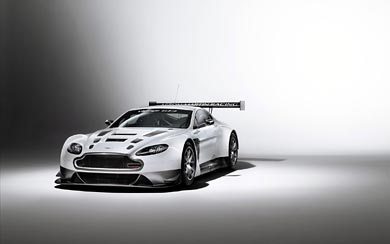 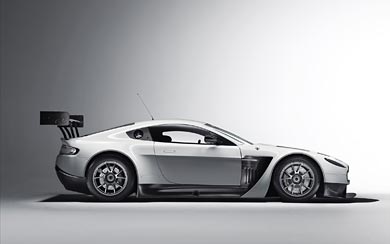 Aston Martin confirms today the specification of the 2012 Vantage GT3 race car. As the natural successor to the enormously successful DBRS9, the new Vantage GT3 will offer customers the latest in race-car technology to ensure the Vantage GT3 has the credentials to compete with the most recent new product offerings from other manufacturers.

The Vantage GT3 features a modified version of Aston Martin’s production 6.0 litre V12 engine found in the marque’s highly acclaimed sports cars. The dry-sumped engine is expected to produce 600 bhp with 700 Nm of torque and its position has been optimised further to improve weight balance. A carbon fibre propshaft mates the engine to a Xtrac 6 speed sequential transmission with semi-automatic paddle shift gear change.

Most dramatic of all, are the new aerodynamics, contributing to a muscular and purposeful stance while maintaining the overall beauty of the V12 Vantage. The shorter wheel base and lower engine position over its predecessor will contribute to enhanced handling and performance. The new car will also provide enhanced driveability with the latest race-developed ABS and Traction Control systems which are fitted to the V12 Vantage GT3 as standard. The Vantage GT3 will be eligible for numerous race series around the world including the FIA GT3 Championship, ADAC Masters, Nürburgring VLN, Blancpain Endurance Series, British GT, Belcar and Open GT among others.