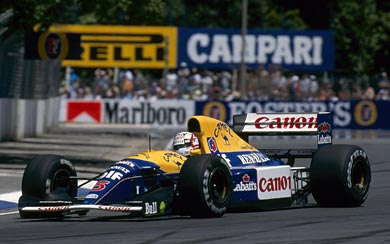 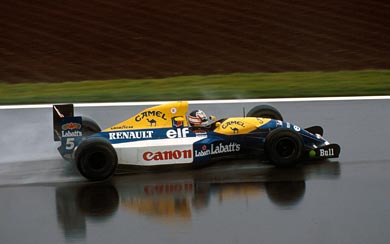 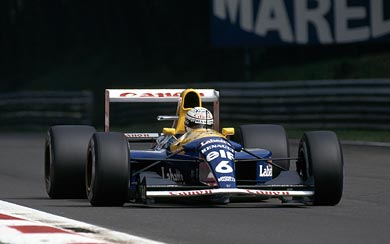 The Williams FW14 was a Formula One car designed by Adrian Newey, used by the Williams team during the 1991 and 1992 Formula One seasons. The car was born out of necessity, as the 1989 and 1990 seasons had proven competitive for Williams, but they had underachieved in their own and Renault’s eyes. Newey started work on the new car soon after joining the team from March in mid-1990. He had designed a series of aerodynamically efficient and very effective cars for March on a limited budget, so with Williams’ greater resources and money he was able to fully develop his ideas. The design showed enough promise to tempt Nigel Mansell to shelve his plans to retire from the sport and rejoin Williams from Ferrari.

Powered by a 3.5 litre V10 Renault engine, the car was the most technically sophisticated on the grid. By 1992 the FW14B featured a semi automatic gearbox, active suspension, traction control and for a brief period anti-lock brakes. Add to that the superb aerodynamics by Newey that was far ahead of the McLaren MP4/6, Ferrari 643 or Lotus 107, and it made for a potent mix, although at the beginning the disbelievers said the car was too technical for its own good. The FW14B was so successful that its successor (the FW15), which was already available mid season in 1992, was never used.